It contains a digital correlation receiver to extract the time code information from the received signal. It also has a simple serial interface (I2C) to transfer the date, time, and DST information to a host micro controller.

This is a 3.3V device! When you connect it to power supply and I2C bus of a micro controller or any other logic, make sure you are not exceeding 3.3V supply voltage and logic level!

An Arduino sketch is included in the downloads, to test the receiver circuit, and to give you a jumpstart for your own development.

This kit comes with the ES100 receiver board and 2 fine tuned, high-Q, high-gain 40mm loopstick antennas.

The original WWVB broadcast signal, while the best technology available in its day, has been challenged with reception issues in many locations and environments. This broadcast was based on an Amplitude Modulation/Pulse-Width Modulation (AM/PWM) scheme with a Binary-Coded Decimal (BCD) representation of the date and time information. The reception issues are primarily a result of the vulnerability of this modulation scheme to interference, and the need for a relatively high level of received signal.

To address these issues, EverSet Technologies collaborated with NIST to develop an enhanced modulation scheme and broadcast format for the atomic clock time signal. This included a new Binary Phase-Shift Keying (BPSK) phase-modulation based time code generator, which has been broadcasting from the WWVB station since October 29, 2012. The enhanced modulation and coding scheme provides several orders of magnitude of improvement in reception robustness, and the new broadcast format also provides new features such as advance notifications of Daylight Saving Time (DST) transitions and of both positive and negative leap seconds. These advance notifications allow radio-controlled clocks to make the appropriate adjustments at each such transition even if the WWVB signal is not received for an extended period of time prior to it.

This module (COB, chip on board) carries the software in it’s internal ROM. This version is because of it’s sturdy connectors perfect for stationary installation and final products. Both modules (with COB and QFN chip) have the exact same functions. 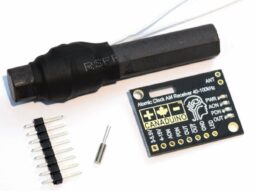 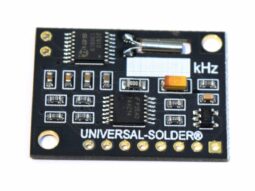 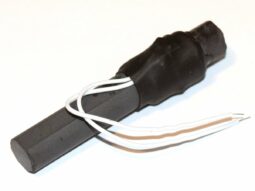 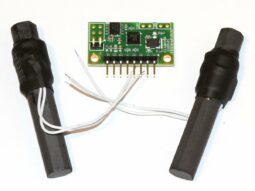